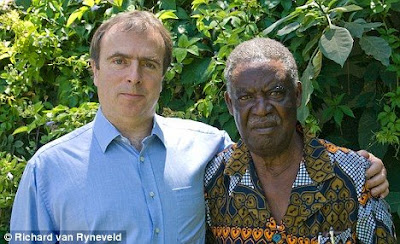 Peter Hitchens is a total hypocrite.

In The Daily Mail he launches regular foam flecked attacks on the BNP, but when he goes to Africa and meets black politicians who state EXACTLY what the BNP say about mass immigration into the UK, he hugs them and gives them his puppydog look.

Hitchens it appears is just another self loathing liberal posturing in the robes of a paleo-conservative reactionary.

Read what he says here. Note his support for Mr. Sata, who indeed seems an honorable and brave man defying a repressive Zambian government that uses its corrupt police force to silence dissent and debate ;


All this has aroused the suspicions of Mr Sata, a populist politician famous for his blunt, combative manner and his harsh, biting attacks on opponents, and who was once a porter who swept the platforms at Victoria Station in London.

Now the leader of the Patriotic Front, with a respectable chance of winning a presidential election set for the end of October, Sata says:

'We don't need to import labourers from China,' Sata says. 'We need to import people with skills we don't have in Zambia. The Chinese are not going to train our people in how to push wheelbarrows.'

In language which seems exaggerated, but which will later turn out to be at least partly true, he claims: 'They employ people in slave conditions.'

Hitchens is a humourless prig who has a marked personality disorder. Like the vicar of Bray he will do whatever is needed to maintain his power and wealth as he has little in the way of talents apart from an ability to write cheap journalistic articles. Roll on June the 4th and lets put this pompous prig in his place.

It s a wonder Hitchens doesn't explode with all the pus and filth bloating his disgusting fat smug trotskyite hide.
What a hideous, two-faced, backstabbing bastard he is!

" .... the traitor moves amongst those within the gate freely, his sly whispers rustling through all the alleys, heard in the very halls of government itself. For the traitor appears not a traitor;

He speaks in accents familiar to his victims and he wears their face and their arguments, he appeals to the baseness that lies deep in the hearts of all men. He rots the soul of a nation;

He works secretly and unknown in the night to undermine the pillars of the city, he infects the body politic so that it can no longer resist.
A murderer is less to fear."

Such a traitor is Hitchens!

For his most high treason and back-stabbing Hitchens will be first for the gallows.